America is now in the home stretch: just an hour ago (as this article is being published), Louisiana was the first state to have concluded its in person early voting, and other states will shortly follow Louisiana’s lead. And with a week to go, control of the Senate remains tight, but polling trends have demonstrably been in once direction since late August.

As we move into the homestretch, what’s immediately apparent when comparing polling data in late August to late October data is what’s changed and what hasn’t. The fundamentals (President Biden’s approval, Congressional job approval, and Direction of the Country) have barely changed in two months. And that’s NOT a data point Democrats would like to see.

And even though the Washington Senate contest showed Democrats comfortably ahead in the state’s nonpartisan primary in August, this race has noticeably tightened since then, and with a week more to go, it’s a race at least worth watching. Although unlike New Hampshire, Washington is a vote by mail state, and as of press time, 17%/over 800K of the state’s registered voters have already voted. 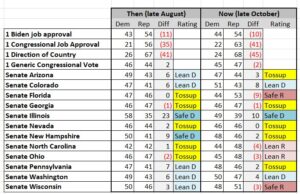 While Election Day itself isn’t until November 8, in person early voting is at its peak, and now that Louisiana has concluded its early voting, other states will follow. Currently, we show 27,002,721 have early voted, and that number is currently incrementing by several million voters a day. What’s worth noting here is that while Democrats (thanks to 61% of that vote so far coming from mail in voting) have a 46-34% lead in terms of party registration of the voter, it was 47-32% Democratic at a similar point in time in 2020. Plus, this year’s early voting volume is 60% lower than it was in 2020, which we believe is a greater than normal drop-off from a Presidential to a midterm election cycle.