America is now in the “3rd Quarter” with the 2022 midterm elections, as individual states are steadily coming online with early voting (early voting in Louisiana begins on October 25 and lasts until November 1). We also have a steady volume of polling that we can use to make assessments on where races are heading – JMC will focus on Senate races today.

Given those criteria, this is the “state of the US Senate” as of the writing of this article (and based on October 1-15 polling data consisting of 45 individual Senate race polls): 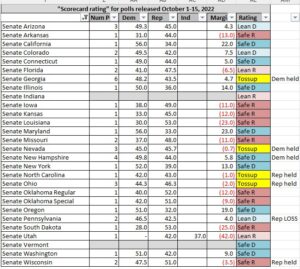 Commentary: Since the previous scorecard, there have been two ratings changes, and those changes marginally benefit the Democrats:

Bottom line: with up to 7 potentially volatile Senate races, there is still a lot up in the air. And time is running out, as early voting is steadily “coming online.”

(In other words, nearly 2.1M have already voted (early voting in Louisiana commences on Tuesday, October 25)) 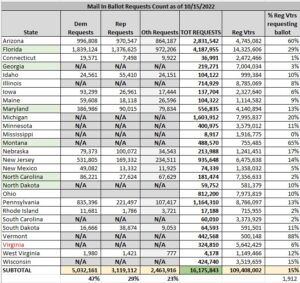 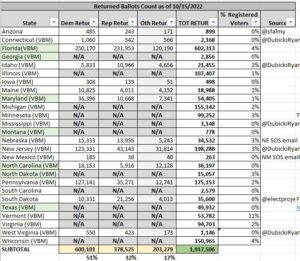 Movement in Senate races has been slow. But now that we’re in the final stretch, and early voting is heating up, the poll numbers (and the trend) REALLY start to matter.