America can now start to count down the 16 days until Election Day, as individual states are steadily coming online with early voting (early voting in Louisiana begins this Tuesday and lasts until November 1). We also have a steady volume of polling that we can use to make assessments on where races are heading – JMC will focus on Senate races today.

Given those criteria, this is the “state of the US Senate” as of the writing of this article (and based on October 16-23 polling data consisting of 24 individual Senate race polls): 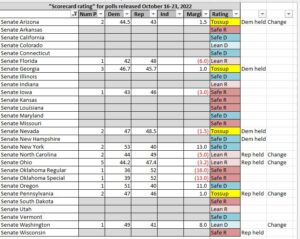 Commentary: Since the previous scorecard, there have been five ratings changes, all of which benefit the Republicans:

Bottom line: there has been a “red breeze” that has picked up enough in the last week to where Republicans are more in the driver’s seat now with these Senate races than they have been in some time. However, there are still two weeks to go, and people are voting now.

While Election Day isn’t until November 8, in person early voting has already started in 24 states, and will commence in 11 more states this upcoming week (Florida, Texas, and Wisconsin are the major ones). As of the writing of this article, here’s where we stand both with mail ballot requests, actual voted mail ballots, and in person early voting: 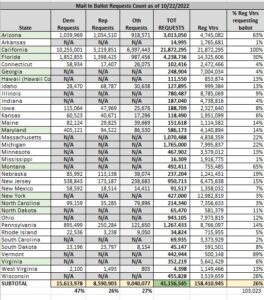 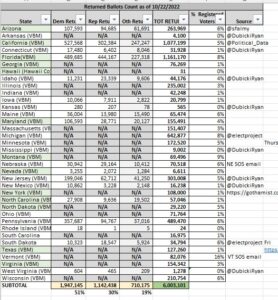 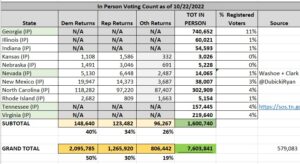 In other words, at least 7.6M have already voted (early voting in Louisiana commences on Tuesday, October 25).

We’re beginning to enter the home stretch now. And poll numbers (and/or any trending) REALLY start to matter now.