We are now well into the latter half of the 2022 election cycle, as 36 states have concluded their primaries. This past week (after a July hiatus only interrupted by Maryland’s primary), primary elections resumed in full force with primaries in six states, including swing states like Michigan and Arizona. However, from the tone of post primary reporting, one might (incorrectly) think that only Kansas voted. More specifically, Kansas held a referendum on abortion where voters by a 59-41% margin chose not to make changes to the state constitution, which currently protects abortion.

It was in the aftermath of this referendum vote that political observers confidently asserted that (according to CNN) “a thunderclap victory on abortion rights in Kansas gives Democrats a potent midterm issue.” Is this a valid assertion based in fact? JMC decided to examine relevant data to test this assertion.

In Kansas’ 2018 primary, 473,000 voted for governor, which equates to a 26% turnout. Last Tuesday night, turnout swelled to (at the time this article is being written) 750,000 for governor, which equates to a 39% turnout. From a partisan turnout perspective, Democratic turnout increased 81% relative to the 2018 primary, while Republican turnout increased 48%. This one piece of data is what has led to the assessment of the Democratic “comeback.” Omitted from this proclamation is the fact that a healthy 62% majority STILL voted in the Republican primary. While this is down from a 67% Republican primary electorate in 2018 (when Democrats in a Democratic year had a fairly competitive Democratic primary), it’s simply not the case that the state “flipped blue” – even in politically marginal (and affluent suburban) Johnson County (which voted 53-45% for Biden over Trump), more voters chose a Republican than a Democratic ballot. In fact, in only 2 out of of 105 counties did more voters pick a Democratic (over a Republican) ballot. 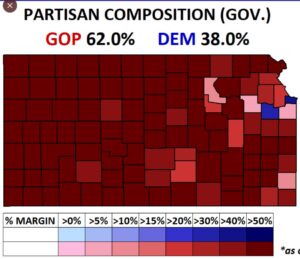 Even considering that Kansas had a referendum that increased its voter turnout (although to a level well below Presidential turnout), another major omission from post primary reporting is the fact that five other states (Arizona, Michigan, Missouri, Tennessee, and Washington) also held primaries last week. In those five states, the Republican share of the primary vote increased from 50 to 55%. From a turnout perspective, Democratic turnout declined 3%, while Republican turnout increased 15%. In other words, what happened outside of Kansas – even last week – has been a continuation of what has happened across the country since the Texas primary in March: elevated Republican turnout combined with flat or decreasing Democratic turnout.

Overall, JMC has tracked 2018/22 turnout for 32 states so far (including Kansas), and the Republican share of the vote has increased from 47 to 53% of the total two-party primary vote. 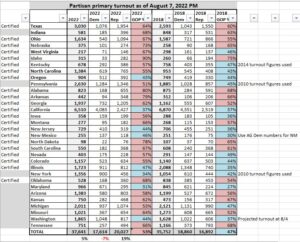 Turnout-wise in those 32 states, Democratic turnout has dropped 7%, while Republican turnout has increased 19%. Compared to 2018, Republicans have “flipped” eight states: Colorado, Iowa, Kentucky, Michigan, Nevada, North Carolina, Pennsylvania, West Virginia. All but two of these eight states are swing states.

When focusing on the states that have held primaries so far, the data (outside of Kansas) does not support the predominant thought of a Democratic comeback. Plus, elections are ultimately won or lost on fundamentals. In other words, midterms are typically a referendum on the party in power, particularly the President (as the leader of his party). President Biden started off his tenure with a 53-36% approval rating; his approval rating initially went “underwater” last August after the Afghanistan withdrawal, and it hasn’t recovered since – his current aggregate approval rating (as this article is being written) is 56-39% disapproval (a 34-point shift in 19 months, with NO recent upwards movement). Given that he was elected with 51% of the popular vote, a sustained drop that substantial obviously shows that there has been either a substantial defection from independent voters and/or soft partisans who perhaps voted for Biden on a transactional basis as a “lesser of two evils.”

14 more states have yet to hold their primaries. 4 of those 14 are on Tuesday (with politically marginal Minnesota and Wisconsin being the headliners). 5 more primaries (including Florida’s) will be held before Labor Day, and 4 of the last 5 primaries will be completed by September 13 (Louisiana’s primary, on November 8, is the very last one). That means we are rapidly approaching the point in the campaign cycle that voters are focusing on the midterms; as that happened, JMC will have polling (in addition to partisan turnout and voter registration data) to make continuous informed assessments about the state of the midterm elections.