The 2022 midterm election cycle has now passed the halfway point, with 29 states’ having conducted their primaries. Candidate qualifying has also concluded in 48 states – only Delaware and Louisiana are left. Ever since JMC has been following the primary calendar starting with the Texas primary on March 2, his observation about this being a “wave year” favoring the Republican Party has not changed; in fact, additional data coming in only reinforces his previous conclusion.

When making such a qualitative assessment, JMC relies on data (as opposed to feelings or “groupthink”). Since 2010, he has used the following data (in addition to publicly released polling data) as the basis for his conclusions:

When examining midterm data in 37 qualifying states between 2010 and 2018, JMC found that Republicans got 55% of the primary vote both in 2010 and 2014 (2010 and 2014 were both GOP landslide years). In 2018 (which was a Democratic landslide year), there was an 18-point swing to a 54% Democratic primary electorate. In other words, partisan primary party vote does have some predictive value. 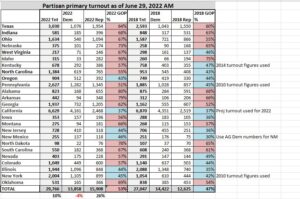 Factor Two – Voter registration changes: Partisan enthusiasm can also be measured in another way: in states with voter registration by political party, the change in partisan voter registration since the Biden inauguration can be an additional barometer of whether or not the political winds have shifted. And even when you consider that in the aftermath of the 2020 Presidential election that voter files were cleaned up to remove inactive voters, partisan trends are nevertheless apparent: between January and September 2021, Republicans lost nearly as many voters as Democrats did: there was a decrease of 1M Democrats and 853K Republicans in that time period (the number of Independents decreased 288K).

That trend suddenly changed between October 2021 and June 2022, when the number of registered Democrats nationally declined another 773K, while the number of Republicans increased 133K, and the number of Independents increased 527K (for proper context, 122M registered voters were tracked in states with partisan voter registration). Regardless of how one wants to spin the data (more and more voters choosing to be unaffiliated versus a pickup in Republican voter registration activity), the fact is that neither trend is something the Democrats should feel good as we are in the midst of a midterm cycle. Especially if (as national polling has consistently showed) Democrats are having problems with independent voters.

Factor Three – The Overall Political Climate: This is another area of concern for the Democrats. Midterms are typically a referendum on the party in power, particularly the President (as the leader of his party). President Biden started off his tenure with a 53-36% approval rating; his approval rating went “underwater” last August after the Afghanistan withdrawal, and his approval rating hasn’t recovered since – his current aggregate approval rating is 56-39% disapproval as this article is being written (a 34-point shift in 18 months, with NO recent upwards movement). Given that he was elected with 51% of the popular vote, a drop that substantial obviously shows that there has been either a substantial defection from independent voters and/or soft partisans who perhaps voted for Biden on a transactional basis as a “lesser of two evils.”

The feeling of discontent has been noted by Congressional Democrats, particularly in the House: now that 48/50 states have concluded their candidate filing for the midterms, we already have 33 House Democrats (compared to 24 House Republicans) not seeking re-election. This is a volume of retirements only seen twice since 1978 (the last time more than 30 House members of the same party retired was in 2018, when Republicans left in large numbers in expectation of the massive blue wave which eventually occurred).

In addition to the factors listed above, there are unknown factors that are just now beginning to play themselves out. Candidate quality (i.e., the caliber of candidate each party chooses in a primary) will certainly play a part in the outcome of the November elections. The question then becomes: will candidate quality be more decisive than negative feelings voters currently have about the country (by a 72-22% margin as this article is being written, voters believe the country is heading in the “wrong direction”)? THAT is the overall theme of the 2022 midterms.

Finally, with President Biden’s approval ratings’ being that bad for months now (and he’s running out of time to “right the ship” for this fall), it does make the Democrats’ jobs much more difficult right now.

Conclusion: While the political climate favors Republicans at this point, we haven’t yet seen much general election polling showing how its candidates are performing in a general election environment (although JMC expects that to change later this summer). Still, there are enough “red signals” appearing (nearly four months into “midterm season”) to be worth writing about.