While Election Day is just over five weeks away, election season is (with the first Presidential debate two days away) moving at an accelerated pace. Given that accelerated pace, JMC will in this article discuss the current atmospherics of the election cycle by focusing on early voting and (to a lesser extent) available polling.

This change in voting preference seems to have continued into the November election. To illustrate, North Carolina kicked off election season when it sent out mail ballots to those requesting them on September 4. As this article is being written three weeks later, 943,702 of those ballots from 14 states have already voted (a week ago, 101,272 in five states had). To put that 944K number in proper perspective, at this point in time in 2016, only 9,500 had voted. That number is almost certain to spike next week, as both Florida and Michigan (which combined have 7.5 million mail in ballot requests) mailed their ballots this past week.

Furthermore, that 944K number is the tip of the iceberg, as 64.6 million (an increase of nearly five million since last week) have requested a mail in ballot, which is a massive number when you consider that nearly 137 million voters participated in the 2016 Presidential election. And that current number is almost certainly understated, as it only includes 24 states. Larger states such as Arizona, New York, and Texas are not yet included in the totals (as well as other 23 states). A detailed breakdown of those numbers (which thus far have are heavily Democratic) is below: 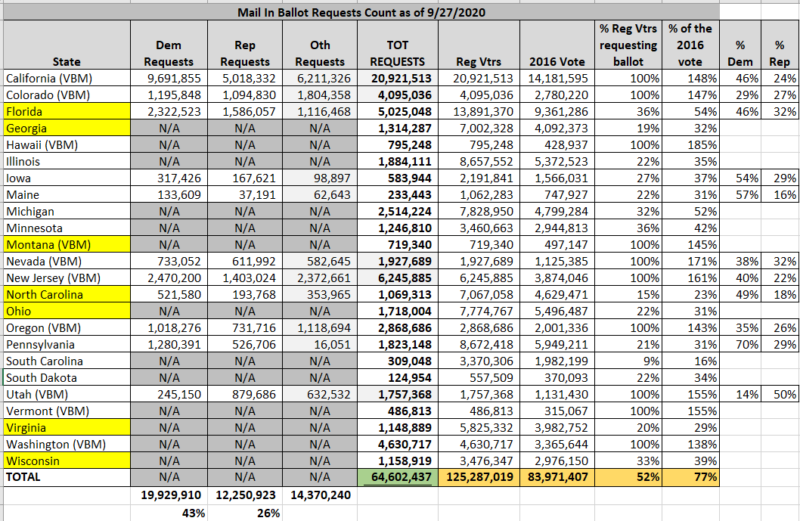 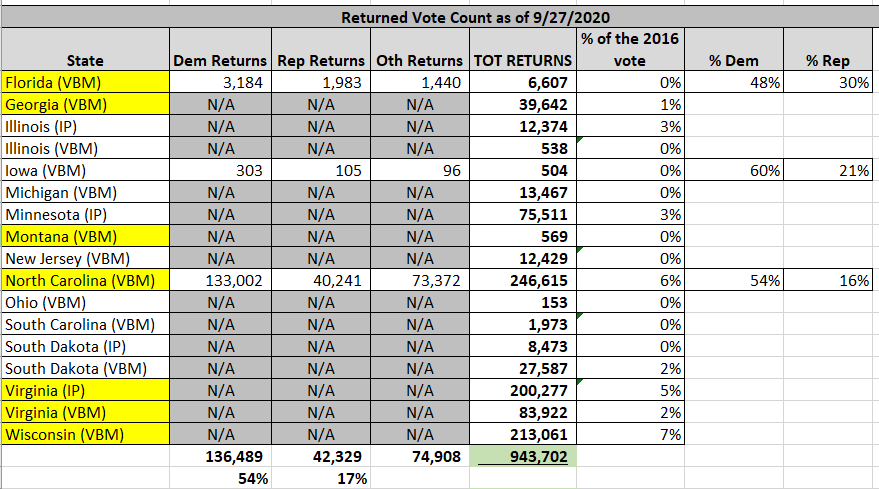 Returned mail ballots and in person early voting by state as of September 27, 2020

National polling (and to a large extent, state polling as well) has been relatively stable thus far in the race. Four weeks ago, Joe Biden had a 50-43% lead over Donald Trump in the national polls – a lead that has barely changed. That makes the first Presidential debate on September 29 critical for the Trump campaign. Not only is this the first time voters can see both candidates on the same stage, but Trump HAS to start closing the gap, because starting on October 4 (and lasting until October 29), in person voting starts (Louisiana’s first day of early voting is on October 16). Given people’s eagerness to vote now and in much greater volumes than in 2016, any early vote is one less voter who can be persuaded to vote for (or against) the President.

So what does a 7 point poll lead for Biden mean in practical terms? The last time we had a Presidential race decided by that large of a margin was in 2008, when Barack Obama’s victory at the top of the ticket was accompanied by massive Democratic gains both in the House and the Senate. Given the increasing prevalence of straight ticket voting, Republicans can’t afford to allow that poll lead to remain. Especially since at this point in time in 2016, the national polling average showed Hillary Clinton with a 44-43% lead over Trump (as compared to the 50-43% lead Biden enjoys now). 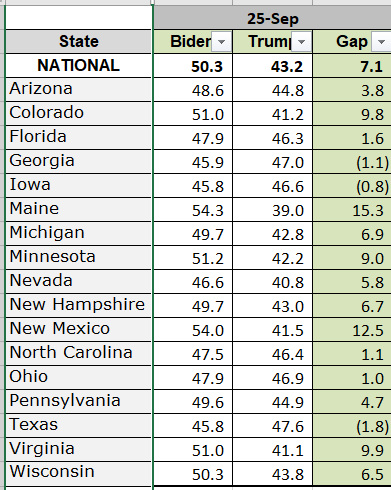