With the first Presidential debate completed and Election Day just over four weeks away, election season continues to move at an accelerated pace. Given that accelerated pace, JMC will in this article discuss the current atmospherics of the election cycle by focusing both on early voting and available polling.

This change in voting preference has continued into the November election. To illustrate, North Carolina kicked off election season when it sent out mail ballots to those requesting them on September 4. As this article is being written four weeks later, 3,304,983 people have early voted either in person or by mail in 22 states where data is available (a week ago, 943,702 in 14 states had). To put that 3.3 million number in proper historical perspective, at this point in time in 2016, only 75,000 had voted. That number is almost certain to accelerate this upcoming week, as (1) in person early voting commences in Arizona, Indiana, Iowa, Maine, Montana, Nebraska, New Mexico, and Ohio; and (2) mail ballots get sent out both in California and New Jersey.

Furthermore, that 3.3 million number is the tip of the iceberg, as 69 million (an increase of over four million since last week) have requested a mail in ballot, which is a massive number when you consider that nearly 137 million voters participated in the 2016 Presidential election. And that current number is almost certainly understated, as it only includes 29 states. Larger states such as Arizona, New York, and Texas are not yet included in the totals (as well as other 18 additional states). A detailed breakdown of those numbers (which thus far have been heavily Democratic) is below: 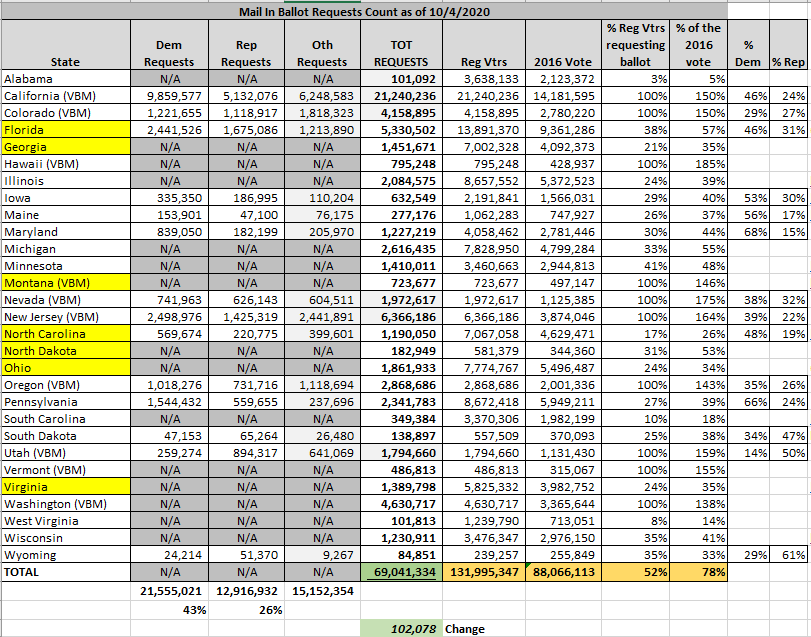 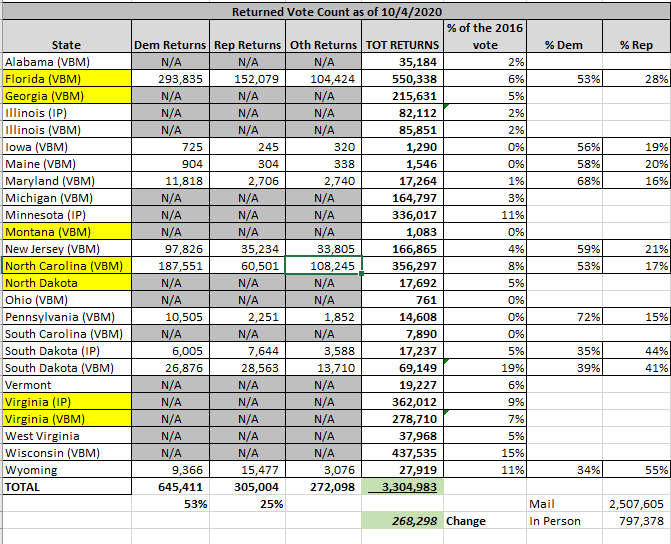 National polling (and to a large extent, state polling as well) has been relatively stable thus far in the race. Five weeks ago, Joe Biden had a 50-43% lead over Donald Trump in the national polls. Since then (and in the aftermath of a combative debate), Biden has somewhat widened his lead to 51-43%, and in 7 of 18 swing states being tracked, he has seen an improvement in his numbers relative to last week (Trump has seen an improvement in 6 states, and the race was unchanged in 5 states). 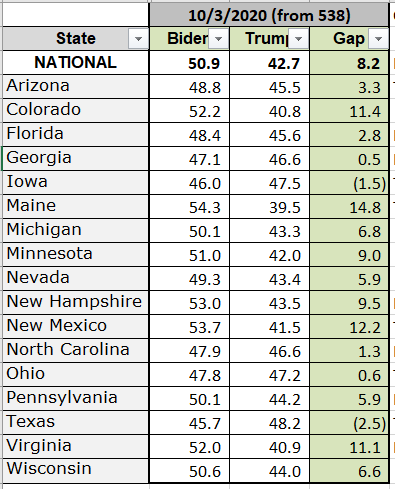 Given the President’s testing positive for coronavirus, the race now gets trickier. While an argument can be made that the continuous media coverage of his hospitalization will relegate his debate performance to yesterday’s news, he still HAS to close his polling gap by two points each week if he wants a certain Electoral College victory in November. And that’s even considering that people are making up their minds now and voting in far greater numbers at this point in time relative to 2016. Biden has his own challenges as well: the continuous coverage and attention to President Trump’s hospitalization makes it more difficult for any new messaging to break through.

Even though the Presidential race is in temporary hiatus, the fact remains that Trump has an 8 point poll deficit, and that poll deficit also has implications in terms of control of both the US House and US Senate, as those races are also on the ballot, So what does an 8 point poll lead for Biden mean in practical terms? The last time we had a Presidential race decided by that large of a margin was in 2008, when Barack Obama’s victory at the top of the ticket was accompanied by massive Democratic gains both in the House and the Senate. Given the increasing prevalence of straight ticket voting, Republicans can’t afford to allow that poll lead to remain. Especially since at this point in time in 2016, the national polling average showed Hillary Clinton with a 45-44% lead over Trump (as compared to the 51-43% lead Biden enjoys now).