While Election Day less than seven weeks away, election season isn’t just underway, but it’s already proceeding at an accelerated pace. Given that accelerated pace, JMC will in this article discuss the atmospherics of the election cycle by focusing on early voting and (to a lesser extent) available polling.

The coronavirus pandemic has been a disruptive event in many ways, and one of the consequences of that disruption has been an almost overnight change in people’s preferences regarding how they vote; specifically, a surge in mail in voting. Two local examples that illustrate this sea change are Louisiana and Georgia, as voters on their own initiative decided to vote by mail (as opposed to states like New York and New Jersey, where the change to vote by mail was mandated by the state government). In Georgia, mail ins between 2016 and 2020 increased from 2 to 47% of the total primary electorate, while in Louisiana, what was typically 3% of the electorate surged to 19% in the July primary and 24% in the August runoff.

This change in voting preference hasn’t changed for the November election; in fact, in a general (as opposed to a primary) election setting, it has only accelerated, as the universe of potential voters is much greater. To illustrate, we have already been two weeks into “Election Day”, as North Carolina sent out its mail in ballots on September 4. A week ago there were 57 million mail in voting requests and 4,390 people in three states (Illinois, North Carolina, and South Carolina) who already voted. As this article is being written, over 60 million have requested mail in ballots, while 101,272 in five states (Florida, Illinois, North Carolina, South Carolina, and Wisconsin) have already voted. To put these numbers in proper context, nearly 137 million voters participated in the 2016 Presidential election. A detailed breakdown of those numbers is below: 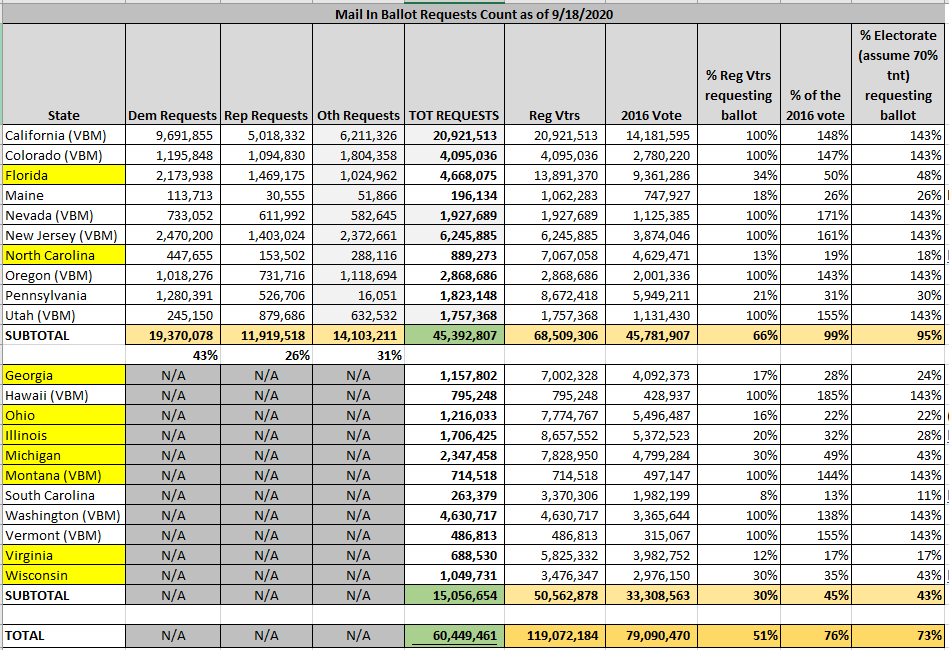 That number will only keep increasing as we inch closer to Election Day and more states “go online” – today, Minnesota, South Dakota, and Virginia are the first states sequentially to begin in person early voting, and they will be joined tomorrow by Michigan, Vermont, and Wyoming. Next week, Illinois begins its in person voting, while Florida will mail out ballots (presently, over 4.5 million have requested a mail in ballot there).

Incidentally, just as there was elevated interest in mail in voting in Georgia and Louisiana in the primaries, that interest has intensified for the November election: in Georgia, 207,716 voted by mail in the 2016 General Election; right now, 1,157,802 have requested a mail in ballot. Here in Louisiana, 63,016 voted by mail in 2016; this week, 177,000 have requested a mail in ballot (there is currently litigation in Louisiana over expansion of its mail in balloting/early voting that may or may not be appealed as the result of a federal judge’s recent ruling expanding mail in voting and the number of days available to early vote in person).

As a final thought on mail in voting, the 60 million number only represents 21 states, so in the opinion of the author, that number is substantially understated, as larger states such as Arizona, New York, and Texas are not yet included in the totals (as well as other 26 states).

Polling has been relatively stable thus far in the race, three weeks ago, Joe Biden had a 50-43% lead over Donald Trump in the national polls, today, the average of polling has tightened a little to 50-44% Biden. While Biden has had a steady lead, the first debate on September 29 takes on added importance, as this is the first time voters can see both candidates on the same stage.