In last week’s scorecard, JMC Analytics and Polling noted that the aftermath of the Kavanaugh Supreme Court hearings brought a “second wind” to Republican candidacies in several tight Senate races; more specifically, Democratic Senator Heidi Heitkamp of North Dakota fell substantially behind for the first time, thus making Republicans’ maintaining control of the Senate a more likely possibility. Has anything changed since last week ? First, let’s talk about the criteria JMC uses to score each of the 35 Senate races on the ballot this year:

Starting with this scorecard, JMC will examine polling data as published on RealClearPolitics for all Senate races for the previous 14 days (as we get into later October, this “lookback” will be compressed to 7 days) and get an average for each race. Once the averages are obtained, here is how JMC rates each race:

Commentary: Ordinarily, the aggregate statistics listed above would be deadly for the Republicans. Except that in the case of the US Senate, Democrats have a lot more seats to defend (26 seats, as opposed to 9 Republican held seats), and those seats are (by and large) on more Republican friendly turf. Furthermore, increased GOP enthusiasm as a result of a conservative backlash against the Kavanaugh hearings has helped Republicans in specific areas. Last week, JMC had noted that GOP leads solidified in Tennessee and Texas, with North Dakota slipping away for the Democrats. This week, Republican held Senate races in Arizona and Nevada (where Republicans had trailed) shifted from “Lean Democratic” to “Tossup.” Democratic held seats in Florida and Indiana, while still in the “Tossup” category, moved about a point towards the Republicans (the Democratic held seat in Missouri remains a tie). One potential “game changer”, however, is in Arizona, where the Democratic nominee was caught on tape yesterday talking about “crazy people” in her state. 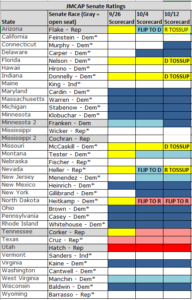 Since last week, early/absentee voting has surged, as more states have mailed out ballots/started early voting. Last week’s best available estimates from Dr Michael McDonald of ElectProject showed that 91,700 have already voted. As of the writing of this article, at least 569,000 have (“at least” because not all jurisdictions report this data; even then, few update this information on a periodic basis). Early voting will continue to accelerate: in the next 7 days, 5 more states (including Georgia, Kansas, North Carolina, Oregon, and Tennessee) will commence with early voting (early voting in Louisiana begins on October 23).