Last week, JMC Analytics and Polling brought back the Scorecard for Senate races, and that scorecard showed Republicans with a plurality lead in Senate races. Has anything changed since last week ? First, let’s talk about the criteria JMC uses to score each of the 35 Senate races on the ballot this year:

Starting with this scorecard, JMC will examine polling data as published on RealClearPolitics for all Senate races for the previous 14 days (as we get into later October, this “lookback” will be compressed to 7 days) and get an average for each race. Once the averages are obtained, here is how JMC rates each race:

Commentary: Ordinarily, the aggregate statistics listed above would be deadly for the Republicans. Except that in the case of the US Senate, Democrats have a lot more seats to defend; more specifically, over half of their entire membership is up for re-election this year. This is a product of accumulated Democratic gains from this “lucky Democratic class” (discussed in additional detail last week’s scorecard).

In the aggregate, races have moved towards the Republicans in that polling has become more favorable for them in Tennessee, and (surprisingly) two polls in North Dakota showing Democratic Senator Heidi Heitkamp running behind her Republican challenger. This offsets Democratic movement against Republican held seats in Arizona and Nevada, where Democratic candidates have opened up leads outside of the 3-point threshold JMC uses for determining if a race is too close to call. It is worth noting, however, that even within thee margin of error, Democratic incumbents rated as being in “tossup” races have seen the needle move in their direction in Florida (from +1 to +2) and Missouri (from -1 to 0) since last week. Any continued movement in their direction would cause JMC to reclassify these races as “leans Democratic” in a future Scorecard. 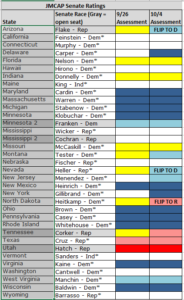 As this article is being written, absentee and early voting activity has picked up: last week, best available estimates (courtesy of Dr Michael McDonald of ElectProject) showed that 7,300 votes in several states had already been returned and counted; this week, 91,700 have voted. Early voting will continue to accelerate: in the next 7 days, 9 more states (including Arizona, California, Iowa, and Ohio) will commence with early voting (early voting in Louisiana begins on October 23).