In August 2016, much of south Louisiana faced massive flooding. In its aftermath, JMC analyzed changes in voter registration both statewide and in East Baton Rouge Parish (voter registration counts were used as a proxy for population change, since recent Census estimates are not yet available) to assess whether the flood’s demographic impact was as substantial as Hurricane Katrina was both in the short and long term in the New Orleans area.

Now that nearly a year and a half has elapsed, it’s time to revisit that analysis for East Baton Rouge Parish, because the last time this analysis was done, it was determined that the parish grew more slowly than the state as a whole. 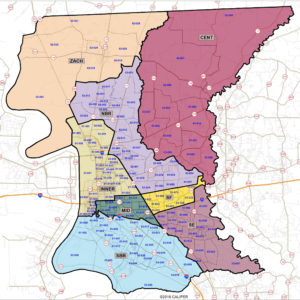 Parish wide, East Baton Rouge Parish’s growth (using voter registration statistics as a proxy for both Census estimates and Census figures) has considerably slowed since the flood. This is also true at the neighborhood/regional level, although (in relative terms) both “South Baton Rouge” (areas south of I-10/west of Airline Highway) and Zachary grew the fastest. Conversely, the “Sherwood Forest” area (neighborhoods east of Airline Highway and between I-12 and Florida Boulevard) saw the steepest decline in its voter population since the flood. There is some (but not a perfect) correlation to the August 2016 flood: South Baton Rouge generally saw minimal flooding, while many parts of Sherwood Forest flooded, as did broad swaths of territory in the southeastern portion of the parish (which for the first time saw a decrease in its voter population since the flood). On the other hand, Zachary continued to grow, despite some flooding that occurred in that part of the parish.

While white out migration has been occurring for years in East Baton Rouge Parish, that ironically has slowed down since the flood, except in Sherwood Forest, which actually saw an accelerated decline of over 7% in its white voter population since the flood (compared to a 5% decrease between August 2014-August 2016).

In the 17 months since the flooding, East Baton Rouge has seen a slowdown in growth from a voter registration perspective, and that slowdown was somewhat (but not entirely) a function of flood damage. What has been newsworthy is that this slowdown for the first time crosses racial lines.