The late Clyde Vidrine once noted as long ago as 1971 that “the vote in Baton Rouge didn’t often match up with the rest of Louisiana.” Back when Louisiana was a solidly Democratic state, that meant that East Baton Rouge Parish was a relatively isolated Republican island surrounded by solidly Democratic parishes. As Louisiana has in recent years moved more securely into the Republican column, however, this statement still holds true 45 years later – except that now, East Baton Rouge is one of a handful of Democratic parishes (one of 10 to vote for Barack Obama twice and for Hillary Clinton with an absolute majority of the vote) set in the middle of Republican territory.

Part of this changeover can be attributed to a more substantial black electorate – in the 2004 Presidential election (the last time a Republican Presidential candidate carried East Baton Rouge Parish), black voter registration was 36%; today, it is 43.5% black.

While those demographic changes explain part of the leftward political shift in East Baton Rouge Parish, there is an additional factor: the emergence of a well educated, politically moderate to liberal white voter demographic that is concentrated inside the Baton Rouge city limits in and around the LSU campus, downtown, and City Park. While this voter demographic tends to support Democratic candidates, it’s more accurate to say that they strongly reject partisan Republican candidates in recent elections.

In other words, while whites are an electoral majority in East Baton Rouge Parish, it is this group that played a part in electing a black Democratic mayor (this year, it was former state Senator Sharon Weston Broome) for the fourth election in a row. However, the stage for Senator Broome’s victory was arguably set on November 8. Not only did Hillary Clinton carried East Baton Rouge Parish by a solid 52-43% margin, but the Democratic candidates for Mayor-President in the aggregate received 48% of the parishwide vote, while the Republican candidates received 44%. 6 of the remaining 8% of the vote went to an Independent candidate (and former Republican) named Darryl Gissel, whose campaign messaging openly eschewed partisanship.

That campaign messaging appealed to the well-educated, affluent, and politically moderate to liberal residents living close to LSU, City Park, and downtown, and it was in those precincts (which for the remainder of the article will be referred to as the “Gissel Belt”) where the balance of power resided during the runoff. So even though Gissel only received 6% of the parish wide vote, he got 21% of the vote in these precincts (the Democratic candidates received 23%, while 54% voted for one of the Republicans). These precincts also gave Donald Trump an unimpressive 55% of the vote, while 36% supported Hillary Clinton (in 2004, these same precincts supported George W Bush 67-32%, so the area has clearly moved to the left politically over the past decade). 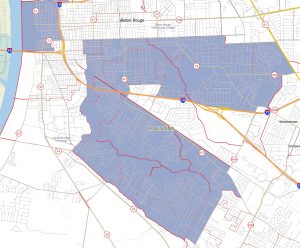 For whatever reason, the Republican candidate (State Senator “Bodi” White) was unable to connect with these crucial swing voters during the runoff, while Democrat Sharon Weston Broome did, and it certainly didn’t hurt that Gissel’s endorsement of Broome gave her an entrée into this constituency. And on Election Day, Broome went from 23% to 40% in the “Gissel Belt”, while the Republican vote only increased from 54 to 60% – in other words, the lion’s share of the Gissel vote went to Broome.

What made this constituency even more critical in the runoff was that outside of the “Gissel Belt”, the Gissel vote was apparently more conservative: Broome led 52-43% in the primary (with 4% for Gissel) and 53-47% in the runoff in those precincts.

Furthermore, the “Gissel Belt” mattered because black turnout was not especially high: JMC estimates that turnout in black precincts was 10 percentage points less than white turnout, which meant that the black electorate was an estimated 39% (compared to 41% in the primary).

The lesson to be learned here is that while East Baton Rouge Parish has been consistently voting (albeit narrowly) Democratic in most elections for the last decade, there is a critical group of well educated, affluent, and non-partisan voters who hold the balance of power, and that partisan appeals do NOT work with this demographic.