A generation ago, voting was an exercise conducted almost entirely on Election Day (although there was limited absentee voting allowed), and this tradition is one that has remained in Louisiana longer than in many states. That began to change in the aftermath of Hurricane Katrina (and to some extent Hurricane Rita) in 2005, which caused massive displacement of voters due to the destruction of their homes.

But while in person early voting has steadily gained broader acceptance in Louisiana over the years, there may actually be yet another paradigm shift: the recent explosive growth of mail in voting. For the longest time, this aspect of voting received little attention. Even after the introduction of in person early voting 16 years ago, mail continued to contribute a paltry 1-3% of the total vote, although in the low turnout special election for Treasurer in October 2017, mail in voting saw a brief spike in popularity when a permanent mail in voter list was implemented – in that election, 6% of the total vote was cast by mail (compared to 16% in person early voting and 77% voting on Election Day).

More specifically, the “paradigm shift” with regards to mail in voting can be pinpointed to the coronavirus pandemic which first hit Louisiana in March 2020. Not only did the initial wave of that pandemic force the Presidential primary to be twice pushed back from March to (eventually) July, but every election since then has seen a steadily elevated level of interest in mail in voting: from 3% of the entire electorate in the November 2019 runoff to (with one major exception) an elevated 17-26% of the entire electorate in the 12 elections that have been held between July 2020 and April 2022. Furthermore, in 7 of those 12 elections, more people voted by mail than in person before Election Day.

That major exception, incidentally, was the 2020 Presidential election, although it’s worth noting that (1) unlike any other election cycle, 3 extra days of in person early voting were added to the calendar (this produced 274K additional in person early votes), (2) a record (from a numerical standpoint) 167K STILL voted by mail, and (3) Louisiana’s laws are fairly restrictive as to who can vote by mail, so there is a theoretical limit as to how large the mail in voting universe can get. 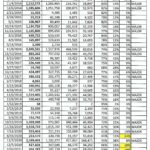 This remains a trend worth watching for this Fall’s elections, as well as the 2023 statewide election cycle, because despite existing restrictions as to who can vote by mail, those in any aspect of the “political/election business” now have THREE Election Days to pay attention to: (1) the moment mail ballots go out/are returned, (2) the week during which in person early voting is being conducted, and (3) Election Day itself.