A generation ago, voting was an exercise conducted almost entirely on Election Day (although there was limited absentee voting allowed), and this tradition that has remained in Louisiana longer than in many states. That began to change in the aftermath of Hurricane Katrina (and to some extent Hurricane Rita) in 2005, with massive displacement of voters due to the destruction of their homes.

One aspect of pre Election Day voting that for the longest time received little attention was voting by mail. Even after the introduction of in person early voting 15 years ago, mail continued to contribute 1-3% of the total vote, although in the low turnout special election for Treasurer in October 2017, mail in voting saw a brief spike in popularity when a permanent mail in voter list was implemented – in that election, 6% of the total vote was cast by mail.

Mail in voting, however, has seen a surge of popularity ever since the pandemic hit Louisiana in March, 2020. Not only did the pandemic twice push back the Presidential primary from March to (eventually) July, but every election since then has seen a surge in interest in mail in voting: from 3% of the entire electorate in the November 2019 runoff to 19% in the July 2020 primary, 24% in the August 2020 runoff, 8% in the 2020 Presidential election (a record 38% of the entire electorate early voted in person in that election cycle), and 19% in the March 2021 primary (which was headlined by two Congressional special elections). 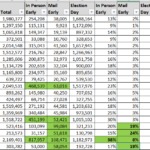 Furthermore, what’s interesting about this sudden increase in mail in voting is that it generally occurred at times that the pandemic was not at one of its peaks in terms of case counts/% positive/number of hospitalizations. This invites the obvious question as to whether mail in voting will become a more statistically significant part of voting for all Louisiana elections going forward. Especially since for the March 2021 primary, not only was 19% of the vote cast by mail, but for the second time (August 2020 was the other occurrence), more pre Election Day votes were cast by mail than by in person early voting.

This will be a trend worth watching for the Fall 2021 elections and beyond, although it’s also worth noting that not everybody in Louisiana can vote by mail – unless you are in the military or overseas, you have to have a reason and meet one of several pre-defined categories (those categories/reasons are defined by the Secretary of State here). In other words, there is a theoretical limit as to how many CAN validly vote by mail, which makes its surge in popularity interesting. 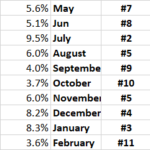 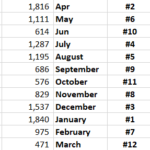