In the last Senate scorecard published two weeks ago, JMC noted that Republicans’ chances continued to improve to the point that they could feel better about their chances of maintaining their Senate majority. Now that early voting is almost all “full steam ahead” (only parts of Florida and Oklahoma have yet to start in person early voting), have things changed any ?

First, let’s talk about the criteria JMC uses to score each of the 35 Senate races on the ballot this year:

Starting with this scorecard, JMC will examine polling data as published on RealClearPolitics for all Senate races for the previous 14 days (after this scorecard, the “lookback” will be compressed to 7 days) and get an average for each race. Once the averages are obtained, here is how JMC rates each race:

Commentary: The electoral reality that Democrats have a lot more seats to defend (26 seats, as opposed to 9 Republican held seats) has finally begun to benefit the Republicans, given that various political metrics (Trump approval, generic Congressional vote, direction of the country) have moved slightly in their direction over the last couple of weeks. And given that quite a few of these 26 seats are on more Republican friendly turf, increased GOP enthusiasm as a result of a conservative backlash against the Kavanaugh hearings has continued to provide (in Senate races anyway) additional benefit to Republicans now that people are early voting, and early voting numbers in state after state are fairly heavy (in three states, current early voting figures have already exceeded the 2014 early voting totals with just under two weeks of voting left).

This week, several changes to the scorecard are beneficial to Republicans. North Dakota continues to look strong for Republicans as a pickup after Democratic Senator Heitkamp’s Kavanaugh vote, combined with two major campaign blunders, has damaged her campaign. Michigan and the seat in Minnesota vacated by Al Franken have now (based on recent polling) moved to “Lean Democratic.” Recent polling in Arizona and Nevada has also moved in the Republicans direction (in the case of Arizona, Democratic candidate Kyrsten Sinema has been caught on tape making disparaging remarks about her state and disparaging “stay at home moms”). The only race movement benefiting the Democrats is that West Virginina (where Democratic Senator Manchin’s Kavanaugh “yes” vote undoubtedly helped) has moved from “Lean Democrat” to “Solid Democrat.”

That leaves us with three tossup seats (Florida, Indiana, and Missouri) all held by Democrats. Florida is an especially interesting situation, because it’s already a closely divided state. But with the devastation recently caused by Hurricane Michael, there is an electoral impact not favorable to Republicans: it’s estimated that as of “press time”, 38K votes by now should have been cast in those impacted counties but haven’t, and since these counties voted 59-38% for Trump, that loss is estimated to cost the GOP 8K votes. 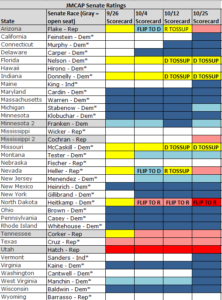 Since the last time this scorecard was released two weeks ago, there has been a considerable spike in early voting. Two weeks ago, 569K had early voted. Now that early voting is nearly fully online, at least 12.2 million have early voted (108K have in Louisiana, which is pretty impressive for a state with no critical Congressional or Senate races). JMC qualifies that number with “at least”, because not all jurisdictions report this data online; even then, few update this information on a periodic basis).