Earlier today, JMC Analytics and Polling analyzed the July 1, 2017 Census estimates by parish for Louisiana and briefly discussed the political impacts of population shifts since the 2010 Census. This analysis will focus on a practical application of those revised population estimates: the impact on each of Louisiana’s six Congressional districts.

As with any redistricting discussion, some “political facts of life” are in order: redistricting itself is a very political process that nevertheless must operate within the confines of existing law, such as equal population constraints and the 1965 Voting Rights Act. 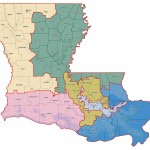 (1) The 3rd Congressional District is the easiest to adjust: it’s in the corner of the state, and is relatively compact. Plus, it is only slightly over the required population, so only minor adjustments need to be made, like (under this scenario) removing a handful of precincts in St Landry Parish as well as a handful of precincts in DeQuincy in Calcasieu Parish. These precincts would be given to the 4th Congressional district (represented by Republican Mike Johnson) to get his district closer to its desired population;

(3) The 5th Congressional District was already underpopulated, and given that it’s giving most of St Landry Parish to the 4th Congressional District, the Florida Parishes are a logical place to gain additional territory needed. After the 2011 redistricting, those parishes were appended to the 5th for the first time, although this district only contains portions of three parishes (East Feliciana, St Helena, and Tangipahoa). The district lines can therefore be smoothed out by picking up the rest of East Feliciana and St Helena from the 6th Congressional District. At the same time, additional territory in Tangipahoa Parish can be appended from the 1st District (Ponchatoula would be left in the 1st District, which is represented by Steve Scalise); 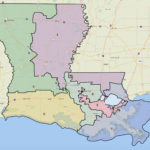 In conclusion, it must be emphasized that this is one of a theoretically infinite number of ways to draw the Congressional Districts. In an actual redistricting setting, equal population and voting rights laws are only the beginning, because input is provided by the Congressional delegation (as well as legislative stakeholders) into crafting such a plan.