When we look at individual parishes, the story is similar to what it was after the 2016 population estimates: 37 out of 64 parishes lost population. Compared to 2016, Iberia and St Charles Parishes went from gaining to losing population. And the historic 2016 flooding caused East Baton Rouge and Livingston Parishes to lose population for the first time in years. 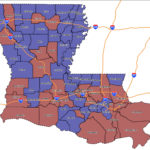 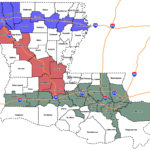 These population estimates (and the actual counts, which will be released after the 2020 census) are important because districts for a variety of government bodies (from Congressmen to local officeholders) are apportioned on the basis of its Census population every 10 years. And given that the next legislative reapportionment will be conducted before the 2023 statewide elections, there will likely be some statewide impact.

Such impact is likely to be more noticeable at the state house level because population changes impact state house districts more than state senate districts. And if we project 2010-2017 population changes ahead to 2020, it looks like Orleans and St Bernard Parishes combined would “recapture” one of the four state House seats eliminated during the 2011 reapportionment. Furthermore, continued robust population growth along I-10/12 between Lafayette and the Pearl River means that a new district is likely to be created somewhere in Ascension, Livingston, Tangipahoa, or St Tammany Parishes.

Since the state House is fixed at 105 seats, those two gained seats have to be offset somewhere. Currently, it looks like Caddo Parish could lose a seat, while another seat would come from one of the parishes not along an Interstate highway. However, it’s important to emphasize that nothing is final until the official April 1, 2020 Census count. Furthermore, internal legislative politics can and will play a large part in determining the specific seats that are added or eliminated.