Given the votes being reported so far in the Presidential race, the Presidential election has been decided in favor of former Vice-President Joe Biden, who has the necessary 270 electoral votes to win. What are some national (and local) takeaways from this election ?

Very high turnout election: In 2016, nearly 137 million voted in that election. As this article is being written, 149 million have voted, with an estimated 7-16 more million votes remaining to be counted. In other words, a record turnout.

Popularity of early voting: Voting before Election Day has been a steady trend for years, and the pandemic accelerated that already existing trend. Not only was voting by mail strongly encouraged (or in some states, mandated), but voters on their own initiative also chose this method of voting. In person early voting also saw a spike in its numbers. JMC estimates that over 104 million early voted this year (compared to 47 million in 2016) – well over a majority of the entire vote cast. In Louisiana, 985K (out of an estimated electorate of 2.15M, or 46% of the entire electorate) chose to vote before Election Day.

No electoral mandate for Biden: Currently, Joe Biden has a 50.6-47.6% (or a 4.6 million vote) lead in the national popular vote. While that is an unambiguous win, it is hardly a landslide victory. Especially since his victory didn’t bring in appreciable numbers of newly elected Democrats in Congress, like Barack Obama’s 2008 win did. This brings us to the next point:

Suburbanites/Independents matter: The United States of America is a politically complex county, with each state having its own unique politics. This complexity requires the building of electoral coalitions to win and maintain power. Winning the Presidency with 46% of the national popular vote in 2016 is a strong signal of the necessity of building coalitions over the next four years, as George W. Bush did between 2001-2004, when he similarly received FEWER popular votes than his opponent did. Of particular concern to President Trump should have been the three “ blue wall” states (Michigan, Pennsylvania, and Wisconsin) that put him over the top in 2016 – in each case, he won those states by a plurality vote. And in two of those three states (just to use these examples), enough suburbanites and/or Independent voters bolted the President to give Biden those states’ electoral votes and ultimately, the Presidency. 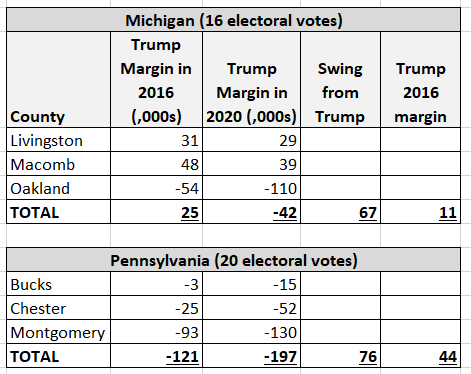 House Democrats’ 2022 Problems: As we speak, the Democrats have held onto control of the US House of Representatives, although with a net loss of 5 seats – hardly an electoral mandate. In the US Senate, they so far have only picked up one new seat, and are unlikely to retake control from the Republicans in that chamber.

Left unmentioned, however, is the fact that the House majority is quite fragile, and they need to be concerned about maintaining their majority in two years, for the following reasons:

Thus listing doesn’t include 12 races that haven’t yet been called (9 held by Democrats and 3 held by Republicans), so technically, there are 48 Democrats held seats that will more likely than not be problematic for then in 2022.

In other words, this was an interesting election cycle, and it’ll similarly be interesting to see what partisan direction President-elect Biden takes, as there are political implications for his party.