We are now in the home stretch of the 2020 Presidential election cycle. Today is the last day to early vote in Louisiana (Louisiana’s early voting has seen record numbers – more on that later), and other states will similarly conclude their early voting this week. Given that we are nearing the end, JMC will in this article discuss the current atmospherics of the election cycle by focusing both on early voting and available polling.

This change in voting preference has continued into the November election. To illustrate, North Carolina kicked off election season when it sent out mail ballots to those requesting them on September 4. As this article is being written four weeks later, 67,741,266 people have early voted either in person or by mail in 49 states (only Oklahoma has yet to start its in person early voting) – the last time we checked, 9,472,192 in 36 states had. To put that 68 million votes in proper historical perspective, at this point in time in 2016, only 22 million had early voted. Since early voting is now proceeding at an accelerated pace, JMC is calculating at the present time that 90-100 million across the country will eventually have voted before Election Day.

Furthermore, those nearly 68 million votes/returned ballots are the tip of the iceberg, as 93 million (an increase of 14 million since the last article) have requested a mail in ballot, which is a massive number when you consider that nearly 137 million voters participated in the 2016 Presidential election. A detailed breakdown of how voting has progressed is below: 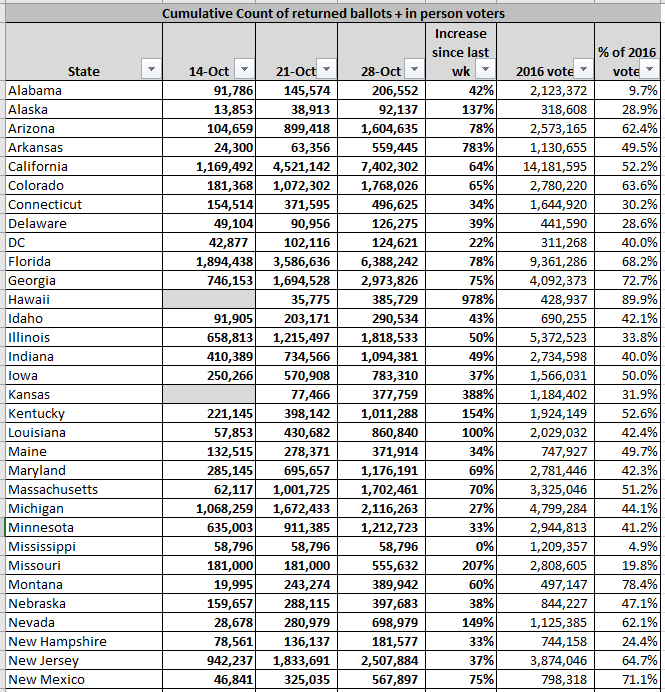 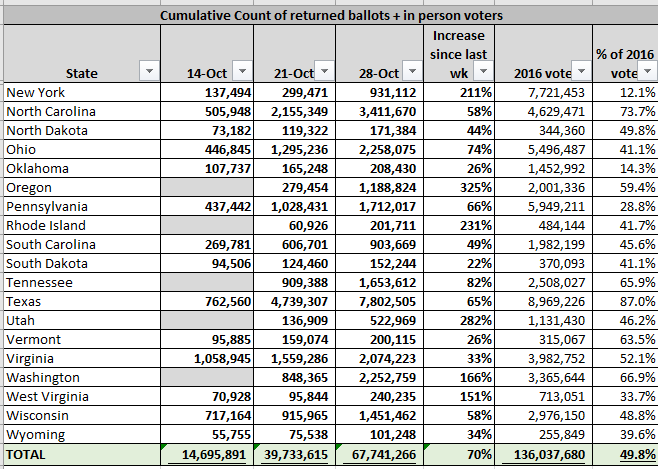 What does this elevated interest in mail in voting mean closer to home ? In Georgia, 2.4 million voted before election day in the 2016 General Election; right now, 2,973,826 have (with four more days to go). Here in Louisiana, 531,555 early voted for the 2016 Presidential election; as of last night, 860,840 have – and 1 million early votes before November 3 is not entirely out of the question.

National polling (and to a large extent, state polling as well) has been relatively stable thus far in the race. Two months ago, Joe Biden had a 50-43% lead over Donald Trump in the national polls. As of this morning, the lead Joe Biden has over Donald Trump is a somewhat larger 52-43%. While in the last couple of weeks there has been some tightening of the race (in 12 of 18 swing states tracked, Trump has closed his poll deficit some), the fact remains that President Trump remains well behind with 68 million votes already cast. In othe words, there are less persuadable voters in the closing days of the campaign. If one were to examine where either candidate stands in the Electoral College right now from an average of recent “swing state” polling, Biden leads in states totaling 289 Electoral Votes (270 are required to win), Trump leads in states with 127 electoral votes, and 122 electoral votes are in “tossup” states. 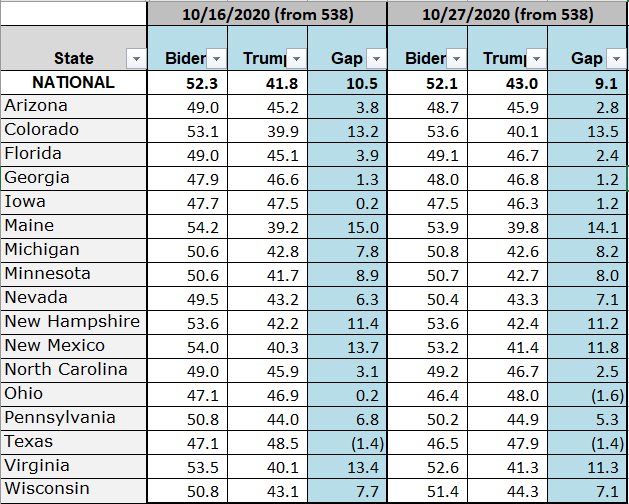 Being 9 points behind in the national poll averages (and not even attaining the 46% of the national popular vote he received in 2016) is at this point a “double code red” for President Trump. These poll numbers also have major implications in terms of control of both the US House and US Senate, as those races are also on the ballot, So what does an 9 point poll lead for Biden mean in practical terms? While Barack Obama’s 2008 win was a 7 point victory; a 9 point lead is closer in equivalency to the 1980 Reagan landslide win over Jimmy Carter, which created massive Republican gains in both houses of Congress (Obama’s 2008 win similarly swept many Democrats into Congress). Given the increasing prevalence of straight ticket voting, Republicans can’t afford to allow that poll lead to remain. Especially since at this point in time in 2016, the national polling average showed Hillary Clinton with a 46-42% lead over Trump (as compared to the 52-43% lead Biden enjoys now).