Louisiana voters tend to be creatures of habit. For years, mail in voting was an insubstantial part of the electorate, and nearly everyone voted on Election Day. That changed after Hurricane Katrina, when in person early voting was introduced. This method of voting took some time for voters to get used to, but it has steadily increased in popularity to the point that a record (from a percentage standpoint) 30% of the voting electorate early voted in person in the November 2019 runoff for Governor, Secretary of State, and other legislative/parishwide races.

Could the coronavirus pandemic change the “status quo” yet again ? As was previously mentioned, voting by mail has historically been insubstantial: in 16 major elections between 2008 and 2019, mail ins only once (and even then, just barely) exceeded 5% of the voting electorate – the rest of the time, it comprised 1-3% of the total vote.

That suddenly changed this year: the originally scheduled April Presidential primary and May runoff were twice rescheduled and ultimately held in July and August. And in those two election days, mail in voting surged. Not only did mail in voting surge from 3% to 19% of the total electorate, but it increased again from 19 to 24% in August. This increase has come at the expense of both in person early voting and Election Day voting. Election Day voting both in July and August plunged to a record low of 61% of the electorate, while in person early voting dropped to 20% in the primary and 15% in the runoff. It’s also worth noting that for the first time, mail in voting in the August runoff exceeded in person early voting. 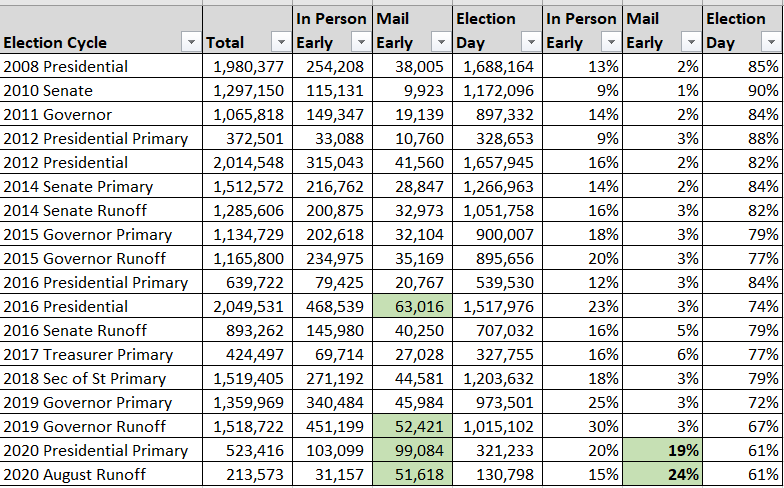 What happened in Louisiana was not an isolated incident: numerous states expanded their mail in voting at the onset of the pandemic. Georgia is a good example to use, as it is a Southern state that that similarly pushed its primary back twice. Between 2016 and 2020, mail in voting went from 2% (in 2016) to 47% of the total vote. From a numerical standpoint, the number of mail in votes increased 27 fold, from 36K to 965K.

Therefore, absentee/mail balloting is likely to be heavier this fall, even though a federal judge will soon decide to what extent Louisianians can vote by mail given the pandemic (Judge Shelly Dick will be hearing testimony on September 8-9). And regardless of her ruling, there are three relevant numbers which JMC believes will be guideposts for the anticipated increase in mail in volume for the November election – for context, 63,016 voted by mail in the 2016 Presidential election.

The “moral of the story” is this: while Louisianians are pretty steady as to how they like to vote, “disruptor” events like Hurricane Katrina in 2005 and this year’s coronavirus pandemic have altered voting behavior, and that abrupt change in favor of voting by mail needs to be contemplated by both parish and statewide elections personnel.