Early voting starts tomorrow in Louisiana for its twice pushed back Presidential primary, although the ballot also contains a handful of local races, as well as Democratic/Republican party committee races. So why does this twice delayed primary matter (July 11 primary, August 15 runoff) ?

Historically in Louisiana, mail in voting has made up an insubstantial part of the electorate, and the increasing popularity of in person early voting in recent years certainly hasn’t helped – on average, between 2008-2019, 13.3% of those voting before Election Day have done so by mail. Or to put it another way, an average of 2.7% of all of those voting have been “mail in” voters. 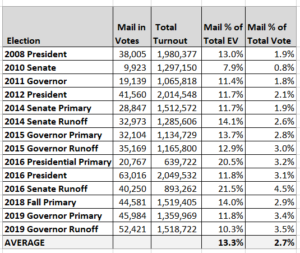 However, mail in voting has become almost instantaneously popular, thanks to the coronavirus pandemic. Because America was in the middle of primary season when the pandemic hit its hardest in March, states have responded (in terms of how they are comfortable with conducting their elections) in one of two ways: (1) opting to conduct their elections 100% by mail, or (2) loosening up the restrictions against mail in voting (for the July/August election cycle, Louisiana has done the latter). Because of concern about possible exposure to the virus in public settings when voting in person on or before Election Day, people have responded by overwhelmingly voting by mail where the option was available.

The state of Georgia has been a perfect “Exhibit A” of this attitude change, especially since it (like Louisiana) twice postponed its Presidential primary. In the 2016 Presidential  primary, 44K Georgians voted by mail, which represents 10% of all early votes cast and 6% of the entire primary voting electorate. However, with the pandemic hitting right before the originally scheduled primary date of March 24, not only was the primary moved back and consolidated with the Congressional/statewide/local primary, but the Secretary of State encouraged Georgians to vote by mail, and voters did so in unprecedented numbers – mail in voting volume surged from 44K to 1.15 million (a 26 fold increase), and this vote (thus far, as votes are still being counted) represents 44% of the entire vote cast, as opposed to its being 6% four years ago.

What does that mean for Louisiana ? JMC foresees a similar dynamic here, as you have a combination of the pandemic and the recent establishment of a permanent absentee list for those 65 years old or over who automatically get absentee ballots mailed to them.

To illustrate the potential impact here in Louisiana, in the 2016 Presidential primary, 21K voted by mail, which represented 21% of the early voting electorate and 3.2% of the entire primary vote. Even though both parties still had an active Presidential contest at that point in time, there are still local races on the ballot, and there will still be some residual interest among Louisianians about voting for President. In other words, mail in balloting will likely be a much more prominent part of the electorate this time around.

The July/August primary/runoff cycle is also important because of the possibility of continued interest in mail in voting for the November 2020 Presidential election. And since the November 2016 mail volume was triple the March 2016 primary mail volume, that elevated mail in volume (especially when comparing July to November 2020) has the potential to delay the count of the Louisiana vote, as processing mail in ballots (in terms of verification and tallying) is a more manual (i.e. slower) process than tallying in person early voting or Election Day votes.