Only in recent years can Louisiana be thought of as a Republican friendly state, and for years, Republicans did not have a sufficiently stable presence in the Legislature to matter. That rapidly changed after a trio of events: Hurricanes Katrina/Rita in 2005, the advent of term limits in 2007 legislative elections, and the BP oil spill of 2010. Since then, Republicans have gained majorities in both legislative chambers and have a sufficient presence now that attaining 2/3 of the House and Senate (i.e. veto proof supermajorities) is within the realm of possibility. Last Saturday’s special legislative runoff elections, however, showed that attaining those supermajorities is not an absolute certainty. What lessons can he taken from those two races ?

First, some background information is necessary: in February, there were a record of seven legislative special elections that were triggered by recent resignations to take state jobs/other elected offices. And of those seven elections, two (HD 18 and 62) were contested partisan contests. 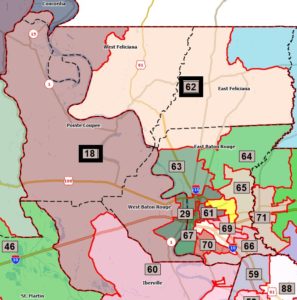 These two districts are both rural state House districts to the north and west of Baton Rouge that once were the backbone of Louisiana’s Democratic voting base. Both have black voter registrations that are higher than the statewide average: House District 18 is 62-36% white/black, while House District 62 is 59-38% white/black. And when this substantial Democratic voter bloc is added to once unionized blue collar plant workers/sugar cane farmers (in HD 18) and/or state employees working in government facilities located throughout the district (in HD 62), you had a nearly unbeatable Democratic voter coalition.

However, a combination of suburbanization and the decline of the Democratic party’s voting strength in Louisiana changed the politics of these districts, at least at the top of the ballot: District 18 (located in the River Parishes) went from 52-45% for Al Gore in 2000 to 58-40% for Donald Trump in 2016. Similarly, the Feliciana-based District 62 went from 52-46% for George W Bush in 2000 to 57-40% for Trump in 2016. This Republican trend also became apparent in recent statewide races as well: John Kennedy got 58% of the vote in both districts in his 2016 Senate campaign, while in the 2014 Senate race, Bill Cassidy received 53% of the vote in District 62 and 49% in District 18.

This Republican trend in “top of the ballot races” naturally gave Republicans hope that they could pick up House District 18 (which has not elected a Republican for over a century) and hold onto House District 62 (which has been held by Republicans since former representative Tom McVea successfully won his old seat back in 2000 as a Republican; when he was term limited in 2011, Republican Kenny Havard succeeded him then resigned after being elected Parish President of West Feliciana Parish last fall).

When Republicans lost both House runoff races this past Saturday, there are some obvious lessons to be learned for both parties, and there with additional implications for the Governor’s race as well.

Donald Trump’s vote is NOT monolithic: Arguably, Republicans thought both House seats were winnable because Trump carried both districts by close to his statewide average of 58-38%. However, because these are both predominately rural districts, candidates are much more likely to be personally known by the voters; as such, reliance on partisan talking points as a substitution for campaign messaging won’t have much of an electoral impact. Democrat Jeremy Lacombe (who was elected to District 18 69-31% over his Republican opponent) was a local attorney who was also involved in the Chamber of Commerce. Similarly, Independent Roy Daryl Adams (who was elected to District 62 54-46% over his Republican opponent) worked in the local family business in the district.

Independent candidates can substitute for Democratic candidates: While the Democratic Party label has become less advantageous to have outside of black majority precincts and/or much of the (more liberal) white constituency in New Orleans/Orleans Parish, voters aren’t necessarily “yellow dog” Republican voters either. In fact, Independent candidacies have thrived from time to time and did in this case: a credible Independent candidate running can pull from both sides of the partisan aisle against a Republican. In District 62, Roy Daryl Adams received an estimated 86% of the black vote and 43% of the white vote – a share of the white vote that is normally unheard of for a Democratic candidate in a partisan race. To use one example of the “crossover” vote Adams received, the precinct containing the affluent golf course community known as The Bluffs (which also has many transplants from Baton Rouge) voted 83-14% for Donald Trump, while Daryl Adams (in this normally heavily Republican precinct) received 31% of the vote.

Proper resource allocations matter: Republicans were correct to target both districts, but on primary night in House District 18, the Democratic candidate led in the primary 43-23%, while a black Democratic candidate received an additional 22% of the vote. In other words, the Democrat started off the runoff with 65% of the vote before even having to worry about the 9% that went to another white Democrat who didn’t make the runoff. The primary election results, therefore, showed that this was not a winnable race for Republicans in the runoff (in fact, Lacombe carried the white vote 51-28% in the primary and 65-35% in the runoff), and any resources invested in that race should have instead been reallocated to bolster the Republican candidate in the House District 62 race, who led in the primary with 45% of the vote.

Putting things in proper perspective (for the Republicans): House Districts 18 and 62 are “reach” districts: they’re not vital for Republicans to maintain their legislative majorities, but they ARE vital if Republicans want to have a legislative “super majority”, particularly in the House. To illustrate, Republicans have a 62-39 edge in the House, with 4 Independents. To attain the necessary eight seat gain requires not only holding into all of its seats (some of which are as shaky as House District 62 was), but picking off Democratic/Independent held seats. An obvious place to target would be the 14 seats held by term limited Democrats or Independents. However, 6 of these 14 seats are black majority districts. And a 7th seat (Democrat Neil Abramson, who represents Uptown New Orleans) has a substantial white liberal voting base (73-21% for Hillary Clinton, despite a modest 22% black voter registration).

That leaves 7 “gettable” House seats, one of which (House District 50 in St. Martin/St. Mary Parishes held by Democrat Sam Jones) has racial demographics similar to Districts 18 and 62: 60-36% white/black and 61-37% for Trump. So not only do Republicans have a playing field of 6-7 House districts that they’d have to sweep (which would STILL put them short of 70 seats), they’d also need to target Democratic incumbents in seats that similarly have a large black minority, such as those held by Chad Brown (D-Plaquemines) and Malinda Brumfield White (D-Bogalusa). In other words, a lot of dominoes all need to fall in the same direction this October for Republicans to attain a super majority in the House.

Putting things in proper perspective (for the Democrats): After the election, chief ABC News Elections Analyst Matthew Dowd tweeted out the following message:

This statement is wishful thinking and NOT reflective of the reality of Louisiana politics: House Districts 18 and 62 were not Republican districts. Furthermore, while Bill Cassidy defeated three term incumbent Senator Mary Landrieu 56-44% in 2014, he carried District 62 58-42%, while Landrieu narrowly carried District 18 51-49% And Senator Cassidy will be on the November 2020 ballot at the same time that President Trump is; that ballot placement will HELP Senator Cassidy, in addition to whatever strength/goodwill be has accumulated as someone who has served in Congress since 2009.

Finally, these races have a bit of “lessons to be learned” in the Governor’s race as well: while Democratic Governor John Bel Edwards will have to contend with the Republican leanings of the state if he wants to win a second term, candidates and campaigns DO matter, and the two Republicans in the race would be seriously overoptimistic if they thought that the Trump vote is automatically theirs without a coherent campaign and messaging that resonates with Louisiana voters.