The 2018 federal election season (with the exception of possible runoffs in Georgia, Louisiana, and Mississippi) is coming to a close. As this article is being written, over 38 million nationally (including a record setting 315K in Louisiana) have already voted either by mail or in person (for comparisons sake, 27 million early voted in the 2014 midterms). So what is likely to happen today ? Using polling, early voting data, and plain old “gut level feel”, JMC will give his best guess as to what will happen both in the US House and US Senate.

(Barely Holding the) US Senate

Senate races are different than House races for several reasons: (1) Only a fraction (35 races, to be exact) of Senate races are on the ballot this year, and (2) the Senate class up for re-election this year is overwhelmingly (26-9) Democratic, meaning that there are relatively few Republican targets, and (3) quite a few Democratic seats being contested are in Trump friendly (and, therefore, potentially unfavorable) terrain.

Having said that, JMC foresees a 50-49 Republican Senate tomorrow morning (the Mississippi Senate seat held by interim Republican Senator Cindy-Hyde Smith will almost certainly be settled in a November 27 runoff). This means that two seats are projected to change hands: (1) Heidi Heitkamp’s seat (D-North Dakota) and (2) the Senate seat held by Dean Heller (R-Nevada) – JMC believes that last minute polling over the weekend and a strong Democratic early vote will tip the race to the Democrats.

There are additional seats which are possible flips, but since JMC has a “no undecided races” policy on Election Day, each race was moved into either the Democratic or Republican column no matter how narrow the margin, with the realization that some of those seats are certainly not “locked down” for either party. Those Senate seats that could still flip (particularly with strong partisan turnout) are: 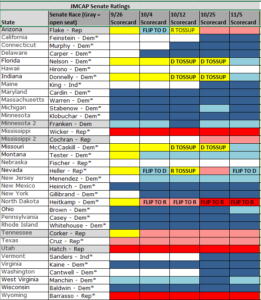 (Losing the) US House

Republican prospects in the US House are much more challenging for the following reasons: (1) The polling average over the last 7 days for President Trump’s approval rating is 52-45% unfavorable, and (2) the generic Congressional ballot over the last week is 49-42% Democratic – those two metrics have changed little in recent months, which suggests that the partisan mood is firmly set this year. And since President Trump’s approval rating almost exactly equals his share (46%) of the national popular vote, Republican House incumbents who ran ahead of Trump in 2016 are in a much tougher position this time around as they seek to hold their seats in unfavorable terrain – generally affluent/white collar suburban areas in major metropolitan areas across the country.

More specifically, JMC sees a 22 seat GOP House loss, with another 28 seats held by the Republicans as being tossups. Those “loss seats” come from the following areas: (1) 11 seats in the Eastern Time Zone, (2) 7 in the Central Tome Zone, (3) 3 in the Mountain Time Zone, and (4) 1 in the Pacific Time Zone.

In other words, with 28 of the 50 actual or potentially vulnerable seats coming from the Eastern Time Zone (and 10 more from the Central Time Zone), we’ll have a decent idea before polls close in the Mountain Time Zone how the race for the House is going.

There are a handful of Democratic seats that are vulnerable: two seats in Minnesota, two seats in Nevada, and a seat in Pennsylvania made more Republican during court ordered redistricting earlier this year.