Even though the first primaries for the 2022 midterm elections aren’t until next March, midterm elections are slowly but surely creeping up on us. What type of year will those midterms be (in terms of which party will have an advantage)? JMC will address this question from several different angles.

Since midterm elections are a referendum on the party in power, the most important number to follow is the President’s job approval rating. Last November, Joe Biden was elected President with a 51-47% popular vote, and at the onset of his administration, his average job approval rating was 53-36% approve/disapprove. Since then, his numbers have noticeably softened, and he currently has a 49-45% DISapproval rating. Obviously, job approval ratings like that are not favorable for his party going into the midterms, especially considering that Democrats are only in control of Congress by very narrow margins (51-50 in the Senate thanks to Vice President Harris’ tie breaking vote, and a slim 220-212 majority in the House (3 vacancies)).

In an “off year” like this across most of the country, little activity is occurring with regards to partisan voter registration in the 30 states that register voters by political party. Still, watching those changes on a monthly basis can provide clues as to the partisan mood of voters, which thus far has shown little change: on January 1, the partisan split in those 30 states was 40-30% Democratic/Republican, while the latest partisan voter registration numbers now show it to be 39.9-29.8% Democratic/Republican.

Even though Joe Biden comfortably carried both Virginia and New Jersey (54-44% in Virginia and 57-41% in New Jersey), these two “pre midterm” elections are useful in that they CAN serve as “distant early warnings” for electoral waves in the making: in 1993 and 2009, GOP wins in BOTH states foretold the 1994 and 2010 GOP electoral waves, while massive Democratic wins in both states up and down the ballot in 2017 provided an early clue that 2018 was going to be a good Democratic year. Which, in fact, was what happened.

Currently, Democrats lead in polling for both statewide contests (47-44% in Virginia and 50-40% in New Jersey), but there are several additional factors above and beyond polling JMC is considering once the votes have been counted: (1) In New Jersey, can Republicans keep it from being a blowout (i.e., a Democratic win of 10 points or greater)/can they pick up a noticeable number of seats in the state House/Senate? (2) In Virginia, why hasn’t the Democrat (Terry McAuliffe) “put the race away,” especially considering that the Republican candidate has been tied both to Donald Trump (who lost the state by 10 points) and has gone on record opposing mandatory vaccinations? (3) Can the Republican candidate in Virginia keep the race close (or even force an upset?), and (4) How many seats can Republicans pick up in the Virginia House (no state Senate seats are up this year)?

As a final thought on Virginia, the early vote is crucial for the Democrats. One intangible benefit they received between the 2017 statewide elections and the 2020 Presidential election is that the rules regarding who could vote before Election Day were loosened up, and between 2017 and 2020, the share of the vote cast before Election Day surged from 7 to 63% of the electorate. And in the 2020 election, Joe Biden actually WON the early vote 65-34% while LOSING the Election Day vote 36-61.5%. So far this year, JMC has seen a HUGE (71%) drop-off in the early vote this year when compared against a similar time in 2020. That fact, combined with the narrow 3-point poll lead for the Democrats, should be of concern to them as we get into the “home stretch.”

Because (1) Midterm elections are 13 months away, and (2) We are five months away from the commencement of Congressional primaries, it’s tough to assess the partisan temperature of voters, ESPECIALLY since only a handful of states have redrawn their Congressional districts (as required by law) after the recent (and delayed) release of 2020 Census numbers. Still, there are some data points available that CAN enable us to establish a framework for what can possibly happen. To start, Democrats in the 2020 election cycle actually LOST seats in the House, and they currently hold a narrow 220-212 lead (of the three vacant seats, two are almost certain Democratic holds, while Republicans should hold onto their vacant seat in Ohio).

Since 218 is needed for a House majority, however, Democrats can ONLY afford to lose 5 seats. And that’s the Democrats’ problem in a nutshell: in addition to the fact that political gravity is not favorable to the party in power in a midterm cycle, Democrats are vulnerable in quite a few seats. More specifically, 38 House seats were won by either party in 2020 by a margin of less than five percentage points (20 by Democrats, 18 by Republicans). Without a Presidential election boosting turnout, those marginal seats become tougher to hold for the party in power. Which in 2022 will be a problem for the Democrats, and it’s more likely than not at this point that the House will flip from Democratic to Republican control.

The situation is somewhat different in the Senate. First, not all 100 Senate seats are up next year; just 34 are. And of those 34, 20 are held by Republicans and 14 are Democratic held. Of the Democratic held seats, all 14 incumbents are running for re-election, and only four of those 14 are in competitive states (Arizona, Georgia, Nevada, and New Hampshire). Republicans, on the other hand, have to contend with two problems simultaneously (with a LOT of overlap): five retirements and six seats (Florida, Iowa, North Carolina, Ohio, Pennsylvania, and Wisconsin) being in competitive states. In other words, Republicans will be spending a lot of time on defense, especially when the quality of their nominee in open seat races in competitive states (particularly in North Carolina, Ohio, and Pennsylvania) will matter a LOT in terms of whether Republicans can hold those seats. Therefore, unless there is a strong Republican wave, it’s not certain at this point that Republicans would net any seat gains that would enable them to take back the Senate next fall. 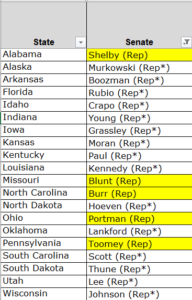 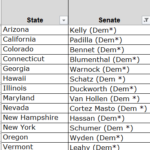 Democratic Senate seats up for re-election in 2022

Voter opinion in midterms is something that CAN be assessed months in advance using available data for clues; the question at this point, however, is the extent to which 2022 will be a Republican year. Or even a year where neither party ends up with an advantage.