Make no mistake, Super Tuesday is a significant Election Day: 14 state contests in four different time zones that involve selection of a about third of all Democratic delegates. As a guide for these contests, JMC has some “big picture” thoughts, broken out by time zone (map of these contests shown below): 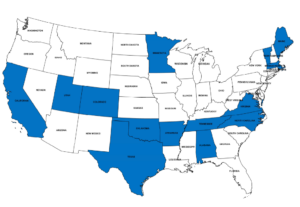 In the Eastern Time Zone are the contests of Maine, Massachusetts, North Carolina, Vermont, and Virginia. These five contests are arguably the most important of the 14 contests for the following reasons:

In the Central Time Zone are the contests of Alabama, Arkansas, Minnesota, Oklahoma, Tennessee, and Texas

In the Mountain Time Zone are Colorado and Utah

California is the only state voting in the Pacific Time Zone. Which means no results will be reported until 10PM Central/11PM Eastern time zone. This primary contest will be the most interesting (or agonizing) for the following reasons: